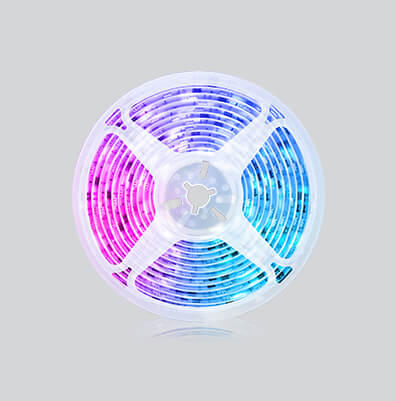 Did you know that most LED strip lights can be cut and reconnected to suit your creative designs? That’s right, you don’t need to be an electrician to customize the lighting in your home, you don’t even need to be that handy either! LED strip lights are a highly customizable, inexpensive, and fun way to add a dose of modern functional, and decorative lighting to your space.

In this article, our specialists are going to break down how to safely cut your LED strip lights and how to reconnect them to take your LED DIY game to a whole other level, and just in time for the holidays, too! Get your LED strip spool and scissors ready and let’s get into it!

Can LED Strip Lights Be Cut?

LED DIY is pretty easy and really fun, but it must be understood that you cannot simply cut LED strip lights anywhere. As previously mentioned, LED strip lights are circuit boards; if you cut the LED strip light in a random position, you are effectively breaking its circuits, so the electrical current will not be able to power the LEDs.

Where to Cut LED Strip Lights

The only place on an LED strip light where it is safe to cut without breaking it is where the copper marking is located. These copper dots are the ending and beginnings of the circuits which power the LEDs on the strip. It is safe to cut these without breaking the entire LED strip if cut cleanly and accurately. Some LED strip lights show you exactly where to cut by indicating with a little scissors logo or cut mark. The cut line on LED lights will be located between a series of copper markings.

How to Cut LED Strip Lights Without Breaking Them

There are two ways to cut LED strip lights without breaking them. The first way is the safer method, but you will inevitably render one end of the strip unusable. This method is better for shortening an LED strip that is too long or if you just want to be extra careful about not breaking the section of the strip that you want to use. It’s also a good idea to use this method if your LED strip lights don’t have a cut line.

This safer method for cutting LED strip lights without breaking them goes as follows:

The other method of cutting LED strips is to cut down the middle of the copper markings or along the cut line, indicated by a scissors logo. This method is better for extending and/or reconnecting sections of cut LED strips together.

For this method, it is very important to make an accurate cut right down the middle; otherwise, you might not leave enough copper on one side for a connector to work or for the circuit to function, effectively breaking the LED strip.

How to Reconnect Cut LED Strips

Once you’ve successfully cut your LED light strip, you can now reconnect them for the purpose of the extension, to join at a corner, and so many other purposes; you’re the designer and the sky is the limit when it comes to LED strip light DIY! Reconnecting cut LED strips is really easy, here are the 3 simple steps for how to reconnect cut LED strips:

Of course, in order to reconnect your cut LED strip lights, you’re going to need connectors. There are a few different types of connectors you can use and are as follows:

How to Reconnect Cut LED Strips Without Connectors

If your cut LED strip lights aren’t working, it’s likely because of one of these reasons:

a) You didn’t cut the LED strip at the correct location. Remember, you can ONLY cut the flex where the copper markings are located. If you cut anywhere else, you will break the circuits and the electric current won’t be able to power the LEDs.

b) You cut off too much copper. You need to make sure that there is enough copper to receive the electric current and pass it on to another strip via a connector. Try to cut the strip so that there is about a millimetre of copper left.

d) If you have extended your strip lights by cutting and reconnecting them and some, but not all, lights are working, it could be an issue with your power supply. The power supply might not be strong enough to power the lights you’ve added to the strip, so you may need to buy a power cable with a slightly higher voltage.

e) If you forewent using connectors and took the soldering route, but your cut strip lights aren’t working, make sure that you connected the positive wire to the positive copper and the negative wire to the negative copper. Positive wires are usually red, and negatives are usually black. If they look good but still aren’t working you might need to redo the soldering or you might have one of the above issues.

Diffuser vs Humidifier: Which Is Better for Your Home

In this article, Maxcio's experts are going to discuss diffuser vs humidifier: which is better for your home?
21 Dec 2022

Smart Bulb vs. Smart Switch: Which One Should You Buy?

Let’s shine some light on this conundrum and find out which outshines which.
08 Dec 2022

Thank you. We've received your details, we will get back with you shortly. Enter your email and get started now!